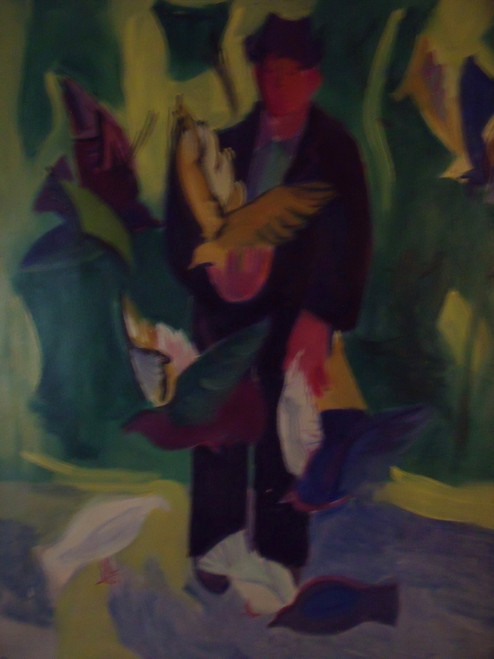 Benn Benn was a pioneer American Modernist whose independent style defied stylistic classification.  Despite excursions into Cubism and Abstract Expressionism, Benn "seems always to have been a 'subject' painter.  Considering this, it is remarkable that he remained visible at all during the 50's and early 60's, when prejudice against the representational amounted nearly to a proscription of it."(1)  Benn's prominence in the art world over 6 decades was reaffirmed at a 90th birthday show at the Hirshhorn Museum in Washington, D.C. in 1974.

Benn was born Benjamin Rosenberg in the town of Kamenets Podolsk just after Christmas in 1884.   This town was the regional capital of an area in what is today, SW Ukraine, and was historically known as Podolia. The area was economically important because of its rich black earth and location near navigable rivers.  At the time of Benn's birth the area was ruled by Czarist Russia and 12% of the population was Jewish.   Most of the inhabitants were Poles and Ukrainians.  They were often in conflict and both sides blamed the Jews for siding with the other.  The Russian rulers exploited these tensions and even encouraged them, which would sometimes result in pogroms.  Just 3 years before Benn's birth Czar Alexander III placed restrictions on Jews' ability to earn a living and where they could live; "pogroms became commonplace."(2)  It is therefore no surprise that the Rosenberg family chose, along with thousands of others, to immigrate from Podolia to the United States in 1894 or 1899.  This was a good decision as Benn's birth place became the site of a notorious massacre of 23,600 Jews by the Nazis in August of 1941.(3)

"Between 1904 and 1908 Benn attended the National Academy of Design…  The Academy curriculum stressed portraiture built up with broad, painterly brushstrokes, a technique that remained the foundation of Benn's style…  By the mid teens his canvases were bolder in color and more decorative in style…  Benn participated in the Forum Exhibition (1916)… as well as the first annual exhibition of the Society of Independent Artists (1917)…  Benn's first solo exhibition was held in 1925 at J.B. Newmann's New Art Circle gallery… [During the 1930's] the artist also depicted urban scenes, yet, unlike the Social Realists, his work was more an affirmation than a critical commentary on the human condition."(4)

Benn himself stated, "As a painter my aim is to organize my ideas into a unified plastic form, so that the whole will create a sense of joy and relaxation in the onlooker."(5)

A description of White Torso by Benn could also apply to End of the Street. "The strong, direct composition underscores Benn's assimilation of Modernist theory.  His use of shallow space filled with flattened geometric forms springs directly from the contemporary European aesthetic.  What distinguishes this painting is the sensitive use of strong colors, so confidently applied."[6]

End of the Street was exhibited at the Hammer galleries at a solo exhibition shortly after the artist's death (#36 in catalogue), and was also part of the collection of the New Britain Art Museum.

Hilton Kramer, former art critic for The New York Times, wrote in 1967, "A certain distinction accures to any painter able to maintain a persistent personal vision and aesthetic quality… Ben Benn is one of the happy exceptions to the rule…  There is a wonderful vigor, an exemplary professionalism and elan, that has been characteristic of his art for many decades."[7]

Benn had many solo exhibitions during his lifetime, including one at the Jewish Museum in 1965.  His works are in many museums, including the Metropolitan Museum of Art, Whitney, and Hirshhorn Museum.  A Benn painting is also "the only American artist represented in the great Kreuller Collection in the Hague, Holland, which houses the finest Van Goghs."(5)

Ben Benn, born in Russia and a pioneer American modernist, was best known for his bold simplification, restrained use of intense, Fauvist color, and Cezannesque composition.

He was a pupil at the National Academy of Design and the Art Students League, and memberships included American Society of Painters and Sculptors, American Artists Congress and the Woodstock Artist Association.  He spent most of his career in New York City where he died in 1883.

He exhibited extensively including one-man shows at the Walker Art Center in Minneapolis, the Jewish Museum in New York and the Hirshorn Museum in Washington, D.C.

A portrait by Benn of New York Judge J. Planken has been at the New York City courthouse, and a still-life painting is in the Kroeller Collection in The Hague in Holland.


Sources include:
Glenn Opitz, Mantle Fielding's Dictionary of American Painters, Sculptors & Engravers
Peter Falk, Who Was Who in American Art

Ben Benn had addresses in New York City from 1894-on. He studied at the Arts Students League and at the National Academy of Design, 1904-1908. His first important exhibition was the Forum Exhibition of Modern American Painters, 1916.

His work is part of the permanent collections of the Museum of Modern Art; The Whitney; Newark Mus.; Baltimore Mus.; Albany Institute of Art, NY; Butler Art Inst., Youngstown, Ohio; Knoxville Art Center; and the University of Minnesota.


Source: Peter Falk, "Who Was Who in American Art"