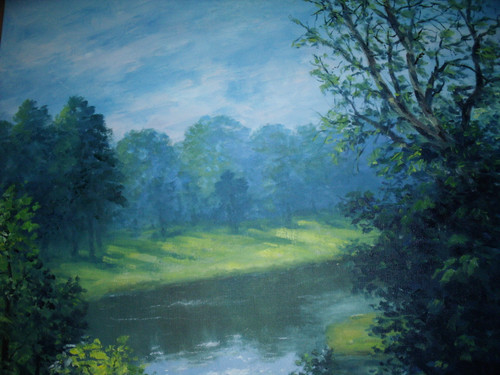 Description : Oil "Along the River”

A painter of society portraits, as well as landscapes of Addingham, Bucks, Delaware and Chester counties, and the Philadelphia area, he lived most of life in Philadelphia. His travels to New England led to his moonlit harbors and dock scenes.

Ricciardi began his formal art studies at the Philadelphia Sketch Club, before enrolling at the Pennslylvania Academy of the Fine Arts, where he received his most influential training under the instruction of Thomas Anshutz, Cecilia Beaux, Hugh Breckenridge, Robert Henri, and Leopold Seiffert. He alter traveled to Paris for further studies.

He was a member of the Philadelphia Sketch Club and the Philadelphia Art Alliance.  His work was exhibited at the Pennsylvania Academy, The Corcoran Biennials, the National Academy of Design, and the Art Institute of Chicago.

The following is from Alderfer Auction House:

Caesare Ricciardi immigrated from Italy at the age of six. He studied at the Pennsylvania Academy of the Fine Arts, and then abroad. He died March, 1973 in Philadelphia, Pennsylvania.

He had a studio on Pine Street in Philadelphia. His specialty was portraits, and he painted financial and political leaders of Philadelphia and New York. He painted landscapes, still lifes, and marines for recreation, and his style was Impressionism.

Paintings by Ricciardi hang in the Philadelphia, Norristown, and Easton City Halls, as well as Federal Courts, hospitals and universities.