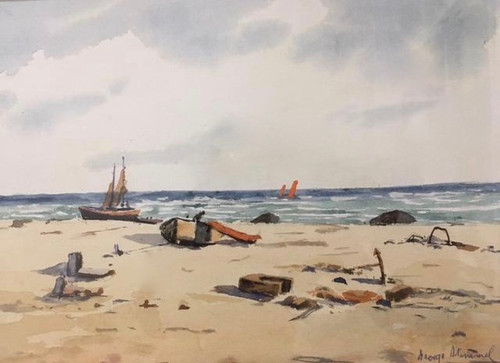 Rarely found are the works of an artist which appeal to most everyone's taste. The diversified repertoire of George Stimmel may fit into this category. His expert draftsmanship, impressionist palette, and wide range of sub­ject matter all explain his appeal. Most attractive is his forthright sincerity that beckons to our human nature.

Born in New York, Stimmel's distinguished career began as a student at Pratt Institute in that city, later he studied at the Pennsylvania Academy of Fine Arts. On re­turning to New York the artist quickly acquired work designing stage sets for the old Metro­politan Opera House and the old silent movie houses in Fort Lee, N.J. He worked un­til retirement as a stage set designer on Broadway and at other New York locations.

After marriage, Stimmel settled in the New Jersey suburbs of New York City. He was known to be sketching almost every day on his lunch hours in New York. Stimmel painted and produced fine prints for over 50 years.

Stimmel's early work in­cluded gouache paintings of stage sets and romantic land­scapes close in style to Maxfield Parrish. He became interested in etching and li­thography in the 1920s until the early 1950s producing a prolific number of editions. His Ash Can School etchings of New York City and vicinity hold their own among the best Ameri­can etchers of the early 20th century. Although he did paint some in oil, watercolor became his primary medium, especially after 1950. He experimented extensively with watercolor and its relationship to different types of papers. Results of these studies are obvious in Stimmel's dexterous use of the medium.

Fascinated with changes of season, Stimmel was especially drawn to the snow covered win­ter landscape. His renderings of New England winters and New York City with blankets of snow are among his best works. These were expressed in water­color and complicated mixed media prints. One of his most successful combinations was lithograph, serigraph, with watercolor or gouache. His nocturnes, autumns scenes, and sunsets deserve special mention as well.

Stimmel did hundreds of plein air watercolor studies before his larger versions of most subjects. These studies are small gems that have spontaneity and freshness, sometimes representative of his best work in spite of their size. Again, many of his etchings and lithographs were small, yet are some of his choice work. Another facet of the artist's oeuvre was Europe. The charm of old villages and architecture especially attracted him. This was expressed in etchings, lithographs, and watercolors.

Book and newspaper illustration also occupied some of his early years. He exhibited in New York at the prestigious Salmagundi Club, the Scenic Artist's Union, Philadelphia Print Club, Ridgefield Park Art Association (NJ) and Hackensack Art Club (NJ). His work was sold by the promi­nent Knoedler Gallery of New York early in his career.