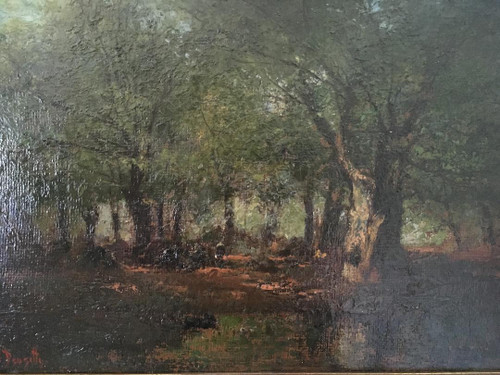 Shipping : $40 (US only; International Please Inquire)

Louis Douzette was a notable German landscape painter. His works are characterized by their frequent depictions of dark, melancholic nightscapes, lit by a central moon and often obscured by thick cloud cover and populated by bodies of water, flora, fauna, figures, and German architecture. This repeated focus has earned him the moniker “Moonlight Douzette,” and his work is often included under the umbrella of late Romantic mood painting. The artist embarked on his career by studying under the Berlin painter Hermann Eschke, and later became a professor at the Berlin Academy of the Arts. Born on September 25, 1834, in Tribsees, Germany, Douzette died on February 21, 1924 in Barth, Germany.