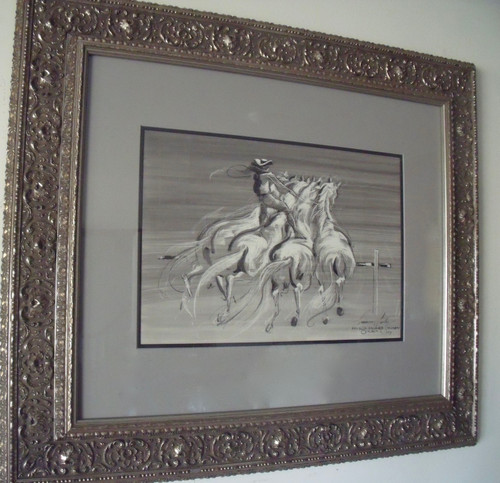 FRAME: Custom framed acid free double mat.
-
MEASUREMENTS : 18 x 13 inches image; 31 x 21 inches with frame approx
-
MEDIUM : Watercolor/gouache on illustration board
-
CONDITION: Very Good. There is minor damage in the margin, this was never framed.  It is from an estate and we believed purchased from the Salmagundi

Club, NYC, in the 1950's/60's  There is a slight bend upper right, hard to see but there is a photo of it.  The actual coloration is the black and

white of the initial photos

Lumen Martin Winter, America's most renowned muralist, spent his childhood in western Kansas, on his father's ranch, which stood along the Santa Fe Trail. Winter was born on December 12, 1908. Listed in Who's Who in America and Who's Who in American Art, the celebrated artist still remembers noticing the ruts from the wagons in the ground and asking his father about them and his father said, “That is the Santa Fe Trail!”. The place stayed in young Winter's mind. After attending the Cleveland School of Art, the National Academy of Design in New York City, serving as an artist with the U.S. Signal Corps in the Air Force in WWII, working as a cartoonist and designer, Lumen Winter went to Santa Fe to settle in 1939. The next 39 years were to catapult Lumen Winter into the forefront as America's most renowned muralist and artist. His work, described by Paris art critic in The Paris Moderne, “is not abstract nor is it realistic, but he has created synthesis which is all his own." His rare genius is demonstrated in the murals in the U.S. Air Force Academy Chapels in Colorado Springs, at the National Wildlife Federation in Washington, D.C., at the AFL-CIO Headquarters in the Capitol, at the Church of St. Paul the Apostle, Lincoln Center in New York City, at the Sheraton Hotel Lobby and the National Bank in Washington, D.C. among others. Winter died in New Rochelle, on April 5, 1982.