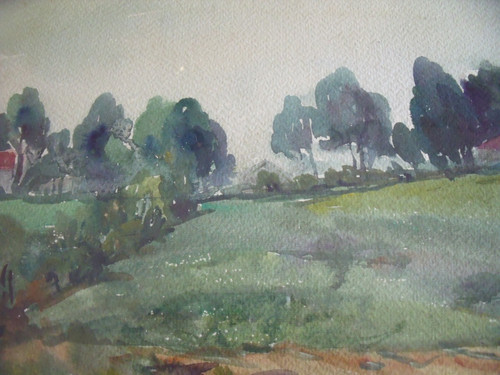 Early 20th century landscape painter Mary Butler was born in Philadelphia in 1865 and is most noted for her depictions of mountains and the sea.  She was an important figure in the Philadelphia art world until her death in 1946.

Butler attended the Philadelphia School of Design for Women (now Moore College of Art), and the Pennsylvania Academy of the Fine Arts from 1896 to 1902, where she was said to have "discovered" the American landscape under her instructors, William Merritt Chase and Robert Henri.  Later, she went to Center Bridge, New Hope, Pennsylvania to study under Edward Redfield, the most celebrated American landscape painter of his time.  She then traveled to Paris, where she worked in the ateliers of Courtois, Prinet and Girardot.

She exhibited extensively at the National Academy of Design, Corcoran Gallery of Art, Chicago Art Institute, Carnegie Institute, Boston Art Club, Albright Gallery in Buffalo, New York, Cincinnati Museum of Art, Panama-Pacific Exposition, and the Pennsylvania Academy of the Fine Arts from 1894 through 1946.

Butler's paintings are found in museum collections throughout the country.  As President for the Fellowship, she organized exhibitions throughout eastern Pennsylvania, and started a movement that became known as American National Art Week.