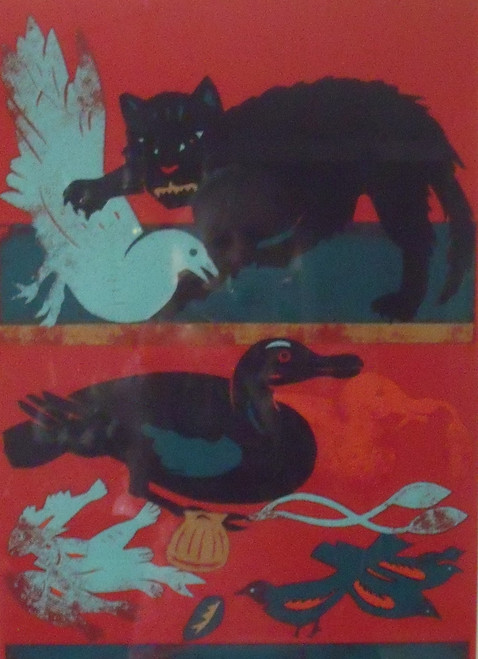 Description :
"Mischief in Pompeii"; signed and numbered in pencil

Signature :  Signed and numbered in pencil

Milton Glaser (born June 26, 1929, in New York City) is an American graphic designer, best known for the I LOVE NY logo, his Bob Dylan poster, the DC bullet logo used by DC Comics from 1977 to 2005, and the Brooklyn Brewery logo. He also founded New York Magazine with Clay Felker in 1968.

Glaser graduated from Cooper Union; in 1954 he co-founded Push Pin Studios, along with fellow Cooper grads Edward Sorel, Seymour Chwast, and Reynold Ruffins. Glaser and Chwast directed Push Pin for twenty years, while it became a guiding reference in the world of graphic design.

Glaser is the subject of the 2009 documentary film To Inform and Delight: The World of Milton Glaser.

In 2004, Glaser won a National Design Award Lifetime Achievement from the Cooper-Hewitt National Design Museum. In 2009, he was awarded the National Medal of Arts by President Barack Obama. [6]

In 1991, he was commissioned by the Italian government to create an exhibition in tribute to the Italian artist, Piero della Francesca, for part of the celebrations on the occasion of his 500th anniversary. This show opened in Arezzo, Italy and one year later (under the sponsorship of Campari) moved to Milan. In 1994, The Cooper Union, Glaser's alma mater, hosted the show in New York.

In 1992, an exhibition of drawings titled "The Imaginary Life of Claude Monet" opened at Nuages Gallery, Milan; another version of this show was exhibited in Japan's Creation Gallery in 1995. In the same year, the Art Institute of Boston hosted a Glaser exhibition.

In 1997, the Suntory Museum, Japan, mounted a Push Pin Studios retrospective, featuring works by Glaser and other Push Pin artists. In October 1999, Glaser's illustrations of Dante's Purgatorio were exhibited at the Nuages Gallery. Nuages also organized a large exhibition of Glaser's work during the 2000 Carnival of Venice.