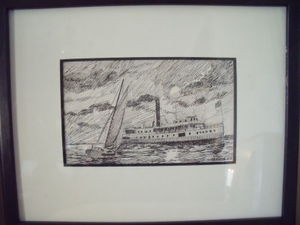 Robert T. Horvath was born in the Pittsburgh, Pennsylvania area. From age five he has had an undying interest in airplanes, model building, and art. Horvath has a Bachelor's Degree in History, a Master's in Art and a second in Library Science. Horvath taught art, primarily in the Harrisburg, PA area, for twenty years.
His art background, in addition to teaching, includes commercial work in Pittsburgh and Harrisburg. His aviation art is held by the U. S. Air Force and can be seen on the air
force web page. He has work in the United States Marine Corps Museum in Washington, D.C. and the Yorkshire Air Museum in Yorkshire, England. It has also
appeared on numerous aviation calendars and, in 2002, a new book on the USMC published two of his paintings.
He has exhibited widely, including one- man shows in Pittsburgh and at the Air Force Museum in Ohio. He has done a series of limited edition prints dealing with historic buildings in
Western PA. These are but one set of colorful and sweeping landscapes created by Mr. Horvath. Others are of the distinctive farmland and marshes of the Eastern
Shore of Maryland and of his several trips to Ireland.
Robert T. Horvath
Since his move to Maryland in 1998, he has studied the Chesapeake Bay workboats and. Since his move to Maryland in 1998, he has studied the Chesapeake Bay workboats steamships and is currently working on a series of paintings reflecting this colorful area.
He is also currently a National Board member of the Norman Rockwell
Museum in Stockbridge, Massachusetts.*
*Courtesy Long Lanes Galleries
*Signed Horvath 03
*Custom frame black, acid free mat, black edged mat
*One of a group of Robert T Horvath please see other auctions; these are gorgeous
*Measures 14 X 11.5 framed; 8 x 5 sight
*Excellent condition; minor rubs frame
.
Images copied from eBay: $T2eC16Z,!zUE9s38E8!BRPSuRi7)g~~60_3_276_2.JPG, $T2eC16R,!yME9s5qHBPLBRPSufpDr!~~60_3_276_3.JPG, $T2eC16h,!yUE9s6NG(5PBRPSuvorUg~~60_3_276_4.JPG