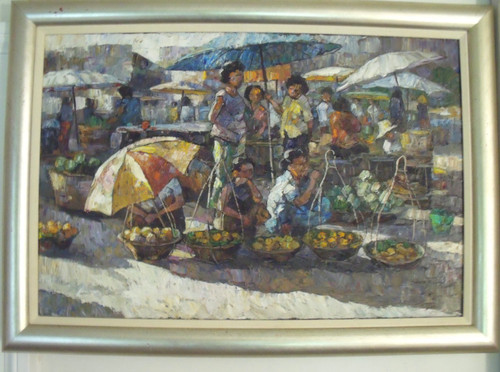 "Sa-ard was born in 1941 in Rayong. He has exhibited (shown) artistic ability since childhood. A graduate of the Arts and Crafts College in 1961. He spent most of his early post - graduate years in advertising, despite his love of painting.

He began his artistic career as movie poster painter, taught art subjects at Santirad school and then worked for the Oriental Hotel in Bangkok.

In 1966 he decided to retire from the business world in order to practice his true love, painting. His works aroused the interest of Asian and American peoples as well as art lovers the world over. The Sa - ard signature has been established as a true symbol of art.

In 1969, I used to work for the USIS organization in Thailand. During that time, he was hired as an illustrator to work on making some paintings about the war between the US and the communists. There he painted many posters about fighting against communism.  This was the beginning of his full-time artist's life and career.