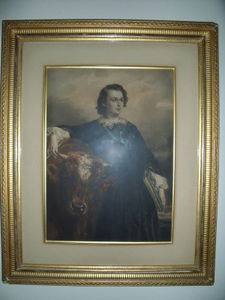 Beautiful old lithograph in the original gold frame.  There is some loss to the frame please look at the photos.  Very good condition, we have not had this out of the frame. This portrait is of Rosa Bonheur:

"Rosa Bonheur, born Marie-Rosalie Bonheur, (1822 – 1899) was a French animalière, realist artist, and sculptor. As a painter she became famous primarily for two chief works: Ploughing in the Nivernais (in French: Le labourage nivernais, le sombrage), which was first exhibited at the Salon of 1848, and is now in the Musée d’Orsay in Paris depicts a team of oxen ploughing a field while attended by peasants set against a vast pastoral landscape; and, The Horse Fair (in French: Le marché aux chevaux) (which was exhibited at the Salon of 1853 (finished in 1855) and is now in the Metropolitan Museum of Art, in New York City. Bonheur is widely considered to have been the most famous female painter of the nineteenth century."* Courtesy Earlywomenmasters.net

Edouard Louis Dubufe (whose name is sometimes spelled wrongly Dubuffe) was a French painter born in Paris on March 31, 1819 and died at Versailles 11 August 1883 aged 64.
Son of Claude Marie Dubufe Paul (1789-1864), painter and Edme Duménillet (1792-1837), it starts out initially a pupil of his father, then by Paul Delaroche (1797-1856) from of 1834.
He creates paintings, depicting scenes of history and religion, ending with a penchant for portraiture.
He married January 11, 1842 Juliette Zimmermann (1819-1855), sculptor, second daughter of piano teacher Peter Zimmermann (1785 to 1853, whose sister Anna married in 1852 a pupil of his father, the composer Charles Gounod who becomes the brother of Edward.
A deep and sincere friendship binding the two men, which will continue beyond the death of Juliet in 1855 and that of Edward.
This is the year of birth of his half-brother Dubufe Paul, George followed that live only one year, then Rene (1850-1876) and Josephine, who married Anne Arnoult Filiberto of Pincepré.
His stay in England from 1848 to 1851 he discovered the great English portrait and made achieve in 1849 by J.
Thomson a lithograph portrait of Louis Philippe in exile from a picture he had painted in October 1849 in Claremont.
Italy holds the year 1852.
Then began his real career portrait with the portrait of the Countess of Beaussier in 1850 that will follow that of the Emperor Napoleon III and his wife Empress Eugenie, in 1853, respectively, which are now owned by the Musée d'Orsay for the portrait of Emperor and the Museum of Versailles, on deposit at Compiegne, to that of the Empress.
He became the most famous portrait of the Second Empire with Winterhalter.
This was also the year of the death of his stepfather and the birth of her first child Dubufe William (1853-1909), who became the painter of the third dynasty.
Juliet will follow his father to the grave two years later with her newborn Hortense Juliet (1855).
In 1856, he paints the Congress of Paris (Museum of Versailles) at the request of the emperor.
Empress Eugenie request participation in the decoration of his Blue Room at the Palais des Tuileries, where he painted her maids of honor.
It enjoyed great success with elegant aristocrats and upper middle class.
In 1866, he must suffer the criticism of Zola in an article "My Show" published in The Event of April 30, on its cliques as a jury member Fair.
He is also friends with the architect Jean-Baptiste Pigny and many of his colleagues, he is also a member of the Salon jury.
He married his second wife Leonie Berthold July 21, 1866 in Paris.
He died on August 10, 1883 in Versailles aged 63 and was buried in Our Lady of Versailles.*

Lovely addition to any room or collection.  Shipping $35.00