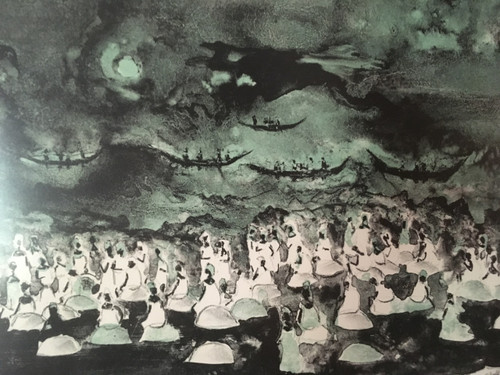 Condition: Very Good not examined out of frame

Note: This print is in the collection of the Philadelphia Art Museum

Adolf Dehn, painter, printmaker, author, illustrator and teacher, was born Adolph Arthur Dehn in Waterville, Minnesota on November 22, 1895. He was valedictorian of his graduating class at Waterville High School and attended the Minneapolis School of Art between 1914 and 1917. Dehn studied for a year at the Art Students League in New York beginning in 1919. While in New York he met Boardman Robinson who introduced him to the master printer, George Miller. The first exhibition of Dehn's lithographs was held at the Weyhe Gallery in New York City in 1921 and the Weyhe Gallery mounted his first solo exhibition in 1923.

Throughout is life Dehn was a frequent visitor to Europe, staying for various periods of time. Upon his return from a three-year stay in Europe in 1925, he changed the spelling of his first name to Adolf.

In 1934, Dehn established the Adolf Dehn Print Club and was one of the founder-member artists of Associated American Artists in New York. He was selected by Prints magazine as one of the ten best printmakers in the United States in 1936 and the following year he worked in the graphic arts division of the Federal Art Project. He taught summers at Stephens College in Columbia, Missouri (1938) and the Colorado Springs Fine Arts Center (1940-1942).

For his lithographs, Dehn worked with the finest printers including Meister Schulz in Berlin, Edmond Desjobert in Paris, and George Miller, Grant Arnold, and Lawrence Barrett in the United States.

Dehn was awarded two Guggenheim fellowships, the first in 1939 and the second in 1951. He also was awarded a Yaddo Foundation grant for the summer of 1955. In 1961 he was elected a full Academician in the National Academy of Design and in 1965 he was elected to membership in the National Institute of Arts and Letters. Dehn’s works are in the collections of the Museum of Fine Arts Boston, Brooklyn Museum, Butler Institute of American Art, Art Institute of Chicago, Library of Congress, Metropolitan Museum of Art, Museum of Modern Art, Philadelphia Museum of Art, Smithsonian American Art Museum, Springfield Art Museum, and the Whitney Museum of American Art.