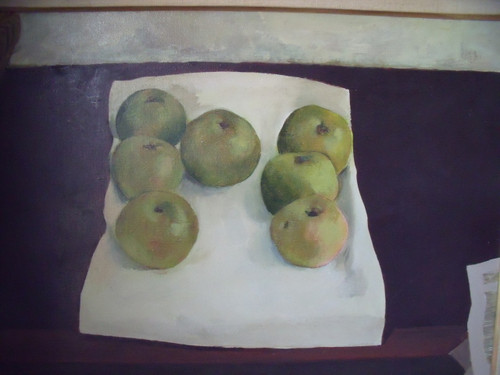 As Art Director of the N.W. Ayer Agency for 45 years, Coiner pioneered the use of art by distinguished artists to create unique marketing identities for national and international clients. During World War II, he was responsible for the creation of the Civilian Defense signs and many government posters. Coiner was the first American to receive the Art Directors Award of Distinction and was inducted into the Advertising Hall of Fame in 1994.

Coiner's landscapes are included in the collections of Whitney Museum, National Academy of Design, Pennsylvania Academy of Fine Arts and Philadelphia Museum of Art, where he served as trustee for nine years while also the Chairman of
Philadelphia College of Art.

Source: Peter Falk, "Who Was Who in American Art"

Charles Coiner was active as a landscape painter in the Bucks County region until his death in 1989.

Coiner was born into a California farming family in 1898. He studied at the Chicago Academy of Fine

Art and the Art Institute of Chicago while working for an advertising agency. This led to a job with

N.W. Ayer and Son, an advertising firm in Philadelphia, where he worked for forty five years, rising to

the Container Corporation of America, integrated the works of Picasso, Dufy, and DeKooning. Coiner

designed the Blue Eagle, the symbol of the National Recovery Act during the Depression. During W.W.

II, he created defense signs and government posters. He was also a trustee of the Philadelphia Museum of

Art, Chairman of the Philadelphia College of Art, and member of the Art Directors' Hall of Fame.

in Mechanicsville where he resided for more than fifty years. The 108 acre farm called “Coltsfoot Farm”

was built in 1747 and is registered as a Bucks County Historical Site. Coiner drew additional inspiration

from his travels to the British Isles, North Africa, South America and Mexico as well as his love for

salmon fishing. Numerous images of Coiner’s work as well as articles he authored have been published in

magazines such as “Esquire.”

Known for his landscape paintings, he worked in a variety of media in a style he described as

impressionist. His twin passions for painting and fly-fishing led to extensive travel, although many of his

paintings were equally inspired by scenes from his own backyard at his Coltsfoot Farm.