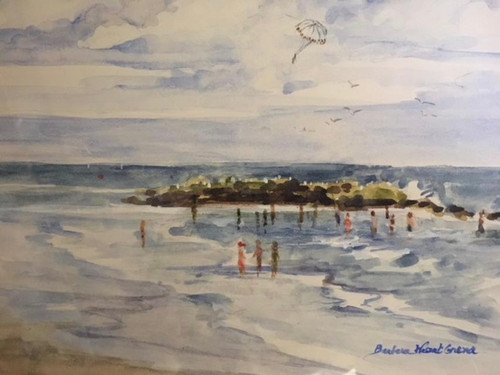 Barbara Waszak Grena
Inspired by the feeling of freedom in God’s world, artist Barbara Waszak Grena, shares her passion for beauty, nature and all components of the natural world. Barbara enjoys painting outdoors, where the changing attributes of climate, hues and wind add finishing touches to her work.
Influenced by her father and maternal grandfather, what was once a hobby at age five soon transitioned into a life choice where Barbara has continued her success through several decades. After studying art at Newton High School in Jackson Heights, Queens, her journey as an aspiring artist pushed her in several different directions. Her artistic endeavors in drawing, painting, pastels, commercial art and photography give her artwork a strong sense of novelty and a distinctive quality.
A notable artist, Barbara’s artwork has been featured in numerous shows, including the Guild of Creative Art, the Ocean County Artist Guild, the Little Silver Borough Hall and Georgian Court College. Her work has been featured in exhibits at the Lever House Gallery, Avery Fisher Hall at Lincoln Center, the Pastel Society of America (P.S.A.), and Salmagundi Club, honoring her talent throughout New York City. She has received several awards and medals for her work and is currently recognized as a New York signature member of the Pastel Society of America. Barbara’s latest accomplishment was inclusion in the Best of Worldwide Landscape Artists book.
One of Barbara’s most valued pieces of art is her pastel “In Honor of All the Heroes,” a tribute to all of the heroes and victims of the 9/11 tragedy. Little by little, the portrait was developed with intense feeling and emotion, to fully encompass the meaning behind this day in history. In July 2004, the pastel was accepted for the exhibition entitled “American Dreams Post 9/11” at the Salmagundi Club. A personal letter from both former Mayor Giuliani and Mayor Bloomberg was sent to Barbara thanking her for the moving depiction of the September 11th tragedy.
When beginning a work of art, Barbara’s key is to not think about selling her work but to think about what pleases her and where her inspiration stems from. If need be, she will take photographs to capture a moment that she would like to replicate on canvas. She will then start the piece in her studio, and decide which medium to paint with.
Her artwork is a collection of oils, pastels and watercolor portraits, figures and landscapes. She is known for her figure work, but due to popular demand, her focus lately has been on landscape art where she paints the rich colors of the earth around her. Barbara organizes her work by designating specific days of the week to working outdoors, in her studio or teaching her skills to other adult students. Depending on her choice of art medium (oil, pastel or watercolor) Barbara’s work can take anywhere from a few hours to several days to complete.

Drawing is the foundation of a good artist. In Italy, during the Renaissance, drawing was taught before any other form of art was practiced. Once mastering the skill of drawing, then one could move forward by breaking the rules and making the art one’s own. Simply put, technique is the foundation of any valuable art.