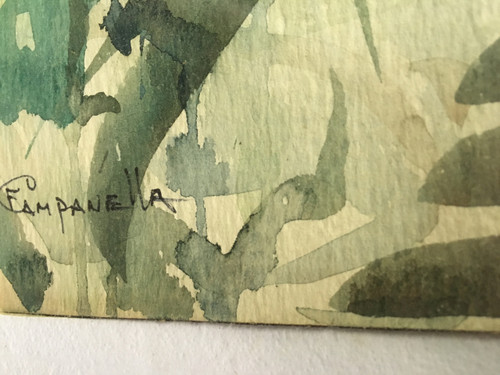 Condition: Very good; could be re-matted; mat has foxing, painting slightly coming out of mat at bottom

Frank Campanella is a listed artist known for New Jersey landscapes and portraits, in oils, pastels, and charcoal. Born in Brooklyn, New York on December 25, 1922 and attended grade school in Bensonhurst, Brooklyn , PS 95 and later graduated from Lafayette High School in 1942. During the period of 1950 to 1951 attended the Art Students League, New York studying fine arts with Robert Brackman, for three years, attending evening classes. He then studied for two years with Ivan Olinsky at The National Academy of Design, 5th Ave and 89th Street New York.

In 1953 he was awarded the $1500.00 Tiffany Traveling scholarship from the National Academy. This was a National Competition, and only two awards are given each year. Later on he exhibited at the local library in Shrewsbury, New Jersey, and I worked in Atlantic City, sketching portraits on the boardwalk.

During the early l980's he sketched portraits on the Asbury Park Boardwalk in New Jersey for a period of about five years during the summer months. And, he spent considerable time sketching landscapes in pastel in Sandy Hook, New Jersey.

He lived in Atlantic Highlands, and recently passed away November 2016.