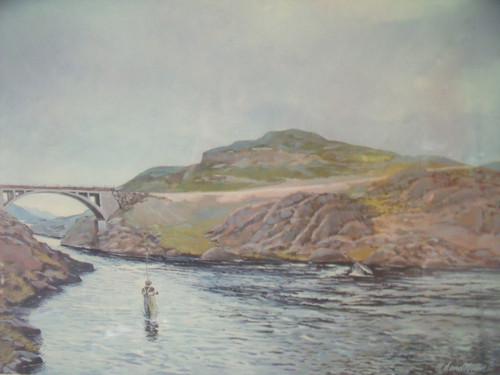 Harvey Sandstrom ranks high among the wildlife -artists of Minnesota, in a state that is famous for them.

He was born in 1925 in St. Paul, but he and his father often managed to get out of the city to go on camping trips;

they hunted, fished, and added to Harvey's collection of birds' wings, animal skins, claws and other relics that attract boys.

This preoccupation with the outdoors and wildlife naturally led to the drawing of birds and animals, and to taxidermy.

serving in the South Pacific.

After he got out of the Navy, he was taking a walk with his spaniel, Laddie, when he heard cries for help. They were coming from the channel between

Round Lake and Lake Phalen. He promptly investigated and rescued a 13-year-old boy from drowning in the icy waters;

later he was awarded the American Legion Medal for Heroism.

He began his four years of study at the Minneapolis School of Art in 1946. Like many other students and beginning artists,

he took any job that came along during those years: driving trucks, farming, surveying, and so on.

Many of the duck stamp artists have done the same and to a man, they brush such work aside and even call it good experience;

they are usually so single-minded that they can easily ignore the non-art intervals as long as they know they'll get back to artwork eventually.

After graduating from art school in 1950, Mr. Sandstrom free-lanced in Duluth for a while, then opened an art studio with three partners.

He began painting wildlife in earnest and held several one-man art shows. His work was displayed and sold in large sporting goods stores

and galleries in New York, Chicago, and many other places in the East, South, and Midwest.