RICHARD KARWOSKI LISTED AMER NY SILKSCREEN 1962 "SIDE BY SIDE" 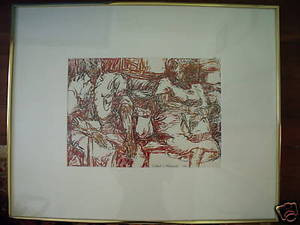 RICHARD KARWOSKI LISTED AMER NY SILKSCREEN 1962 "SIDE BY SIDE"

Since 1963, Mr. Karwoski had over 40 solo exhibitions and participated in over 500 group shows throughout the United States and Canada. He received innumerable awards, and wrote a book "Watercolors Bright and Beautiful". His work with watercolor furthered the medium which he felt could make as strong a statement as oil. His art has been the subject of innumerable articles and reviews in publications such as The New York Times, Woman's Wear Daily, Arts Magazine, American Artist, and Artspeak.