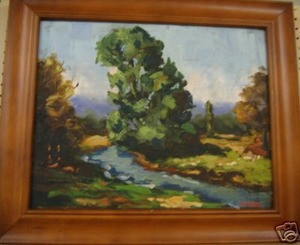 ROBERT OLIVER FRICK AMERICAN LISTED OIL -LITTLE LEHIGH" (noted on the back) Lovely oil on board measures 25 x 21 early 20th century. Mr Frick is known for his landscapes and this is one of his earlier ones. It is in very good condition, there is a pinpoint hole where a thumbtack would have been. It is framed in a newer walnut frame. Overall a lovely presentation, ready to hang. Shipping $20.00 + insurance.

Perhaps best known for his rural New England landscapes, Robert Oliver Frick carefully studied and depicted the seacoast of Maine as well. He received such notable recognition as listings in "Men of Achievement", Great Britain's "Who's Who" in the World of Art, the "International Biographical Index, Cambridge, England and "Who's Who in American Art".