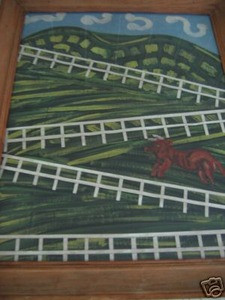 Description:“RED BULL” AMERICAN FARM. This is artist Paul Nickel’s tribute to American Farms, an unusual subject for him, in an delightful use of paint , cut canvas and found objects.