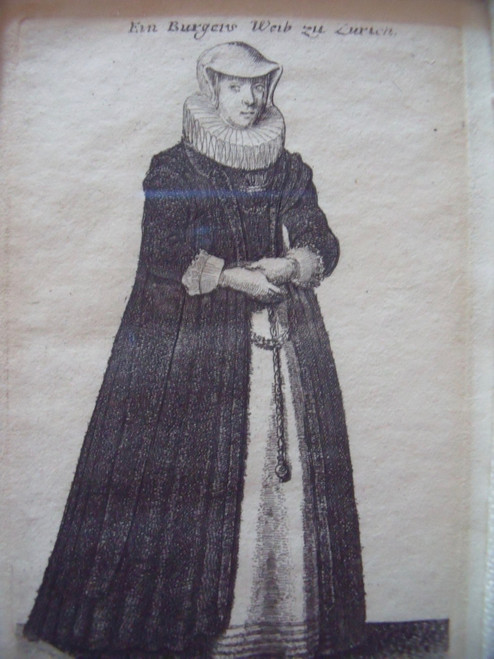 Bohemian born engraver and watercolorist Vaclav (Wenceslaus) Hollar was born in Prague, on July 13, 1607. He trained in the workshop of Merian in Frankfurt, and became one of the foremost engravers of topographical views in the 17th century. In 1636, while working in Cologne, he met the English connoisseur, the Earl of Arundel, who employed him as a draftsman and took him on a tour of Europe to make views for his private collections.

On account of his English connections Hollar finally settled in London, and-during the Civil War he fought on the Royalist side; his views of the city form an invaluable record of its appearance before the Great Fire of 1666. He was very prolific and engraved a wide range of subjects apart from views, including illustrations of the Aesop's Fables.

Hollar produced a variety of works; his plates number some 2740, and include views, portraits, ships, religious subjects, heraldic subjects, landscapes, and still life in many different forms. His architectural drawings, such as those of Antwerp and Strassburg cathedrals, and his views of towns, are to scale, but are intended as pictures as well. He reproduced decorative works of other artists, as in the famous chalice after Mantegna's drawing.

One of Hollar's most famous etchings is a picture of the Cathedral of Our Lady (Antwerp), dated 1649. The work's lively figural decoration, so typical of Hollar's work, includes a procession towards the entrance of the cathedral, a horse-drawn coach, and passerby and dogs in a square in front of the church. The picture of the Antwerp cathedral was on display at the Lobkowicz Palace during the Lobkowicz Library exhibition "Architecture in the Work of Peter Paul Rubens and Vaclav Hollar", which ran through the 30th of May, 2013.

Almost complete collections of Hollar's work are kept in the British Museum, the print room at Windsor Castle and the National Gallery in Prague. Hollar's oeuvre was first catalogued in 1745 (2nd ed. 1759) by George Vertue. The prints were subsequently catalogued in 1853 by Gustav Parthey and in 1982 by Richard Pennington. A new complete illustrated catalogue has been published in the New Hollstein German series. Much of his work is available online from the University of Toronto. The Folger Shakespeare Library also holds some 2000 prints, drawings and other works by Hollar.