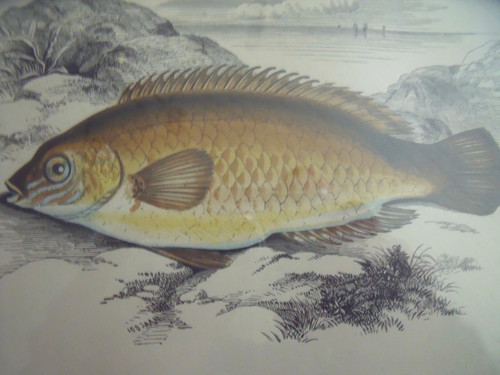 Condition: Very good condition, all have slight toning near mat  Not seen outside of frame.

Born in Polperro in 1789. He studied medicine in London returning to Polperro in 1810, where he became a local doctor and apothecary. In addition, he applied his surgical skills to the study and dissection of the local fish. In many ways, Couch was the prototype Victorian provincial naturalist, a trained physician whose interests included zoology, botany, geology, ichthyology, archaeology, Cornish folklore and local history. In addition, he was a classical scholar and writer. His major works included “A History of the Fishes of the British Islands”, in four volumes, and a translation of Pliny’s "Natural History "

Couch relied on many of the local fishermen to help him in his research. He made hundreds of drawings of fish he dissected, keeping a constant jet of water over the specimens so that the colours would not fade whilst he was painting them. His watercolour illustrations are considered to have artistic merit.

He married three times and his second wife, Jane Quiller, had six children, two of whom also became doctors. One of his grandsons was the writer, Sir Arthur Quiller-Couch, affectionately known as Q. Other works of Jonathan Couch included his notes on Cornish beliefs and various documents on evolution.