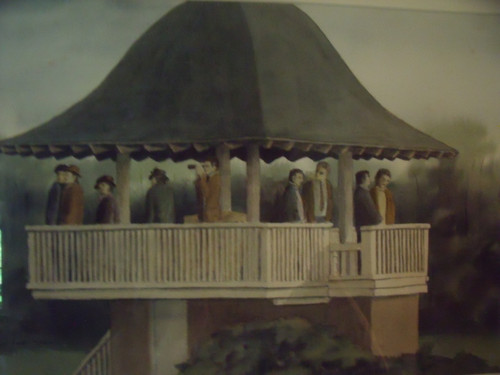 Condition: Very good.  Acid free mat; nmae of painting on the back in pencil

Jonathan Talbot was born in New York City on November 14, 1939, and has established his primary studio in Warwick, New York, although he has also worked in Spain, France, and England.

Many of his pieces are collages, ranging in size from 2 X 3 inches to 6 X 9 feet. He constructs the collages from found objects and hand-made materials, and assembles them in a process he originated that eliminates liquid adhesives from the collage assembly process. This unique method involves coating his materials with acrylic medium and using heat to fuse the pieces together into finished works.

Some his paintings and collages contain identifiable images, and he describes his styles as ranging through impressionism, realism, and abstraction.

He is a second-generation artist as his mother, Helen Talbot, exhibited in New York during the 1920s and 1930s. As a youngster, he associated with artists including Jacques Lipschitz, Alexander Calder, and Thomas Hart Benton, but his first career was in music. Talbot studied in Europe and performed at Carnegie Hall and Phillmore East in New York and did recordings for Columbia Records.

In 1970, Talbot left his music career behind for the visual arts. He studied briefly at the San Francisco Academy of Art in 1971 and then as an intaglio printmaker worked as an etcher of genre subjects. After seven years, he turned to paintings and collages.

He has exhibited in New York at The National Academy of Design and the Museum of Modern Art, and in Washington D.C. at the Smithsonian Institution.

Solo Exhibition: "The World of Jonathan Talbot," at the Byer Museum in Evanston, Illinois, 1984