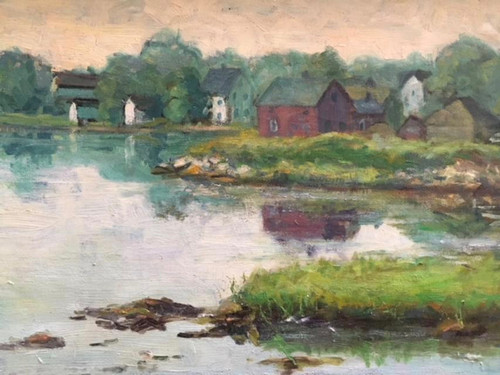 William J. "Bill" Schultz had been a reknowned artist and teacher for over sixty-five years, even almost until his death in 2005. He was a founding Director of the American Impressionist Society and an award winning member of the Pastel Society Of America. Schultz began his art studies at age 13, continuing through high school, then following his service in World War II he enrolled in, and graduated with high honors from the Vesper George School Of Art in Boston, Massachusetts. He continued his studies under notable National Academicians Robert Brachman, Ivan Olinsky and Jerry Farnsworth.
Schultz opened his own art studio and school in Lenox, Massachusetts and taught hundreds of students, some of whom are now nationally recognized themselves. After 25 years at that location Schultz and his wife moved to Vero Beach, Florida where he continued to teach, as well as provide lectures and demonstrations around the country.

Illustrated articles about Schultz and his work have appeared in "American Artist", "Southwest Profiles", "Artists Of Florida" and other periodicals.
For a short time he had studied along side of Norman Rockwell at a studio in Stockbridge, Massachusetts where Rockwell had established the base for his illustration work. Schultz was the proud possessor of an autograped sketch of himself that Rockwell had created, signed by Rockwell.
Schultz's art has been exhibited in museums and galleries in Boston, New York City, Sante Fe, and numerous Florida locations. His paintings hang in the homes and offices of many collectors who enjoy impressionist work.
Courtesy Ro Gallery